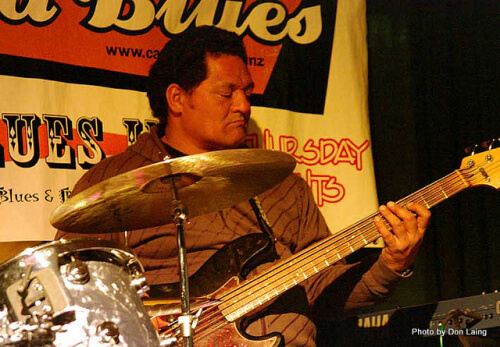 You’ll often see Elliot Fuimaono on bass at the Bristol, leaning back with eyes slightly closed, behind Darren Watson, Dave Murphy, or the Kemptones. His baselines have anchored many a jam night and special show, and he has recorded with Darren Watson, Brannigan Kaa, and Carol Bean. Recently I joined Elliot for a quiet beer and a chat.

In 1960 Elliot Fuimaono was born to Maori and Samoan parents in the King Country town of Taumarunui. His early life centred around family and church: first a mainly Maori church, then a Samoan church after his family moved to Wellington when he was 9.

Music started with singing at church, and later playing on family instruments. He took up bass at his brother’s 21st. His brother was the usual bass player for the family band, but he didn’t want to do it on his birthday so Elliot filled in and has never stopped. He has been playing in family bands since 1975. They used to play open air Christian gigs at Pigeon Park on Sundays, then switched to playing covers, and later originals, as Taste of Bounty.

After the death of dynamic Hendrix-inspired lead guitarist Roy Fuimaono, the band became Bounty, then New Shuz, playing mainly pubs, but also at Sweetwaters. Elliotte joined Brannigan Kaa’s Brown Street about the same time as Chicago Smokeshop was smoking stages all over New Zealand. The bands went to each other’s gigs, often playing at the Oaks and at Western Park jams.

The 90s found him joining South Side of Bombay, who had been going 6 years and already had a hit single ‘What’s The Time Mr Wolf’. Elliot spent 3 years with them, touring New Zealand, Australia and Noumea as a full-time musician. That was quite a cool band, wasn’t it? “Apparently – I was only in it!” Lance Sua told me once that touring with SSOB was what made you as a bass player. “Apparently … [Laughs] Well, I suppose you make less mistakes.”

At jam nights you pick up songs very quickly by ear. You seem to have very good ears. “Apparently!” How did you end up getting involved with the Blues Club? “I started coming along about 4 or 5 years ago just to listen and enjoy the night. I already knew Dougal Spier – he was nice to me. I didn’t know anyone else. Then I started playing music with Dougal. I love the Blues Club. I like to go along no matter who is playing.”

Who do you admire? “I like all the big names but I like watching local guys play. I get more out of that than US players. It’s not like watching a DVD. It’s more immediate.”

Elliot admits that punctuality isn’t his strong point. A couple of times he’s turned up for a gig after the band has started playing. “Everyone knows I’m going to be late, but I’m going to turn up anyway.” I mentioned that at the previous evening’s jam I was tired and ratty, didn’t feel like singing at all, but once I started playing I suddenly found my mojo. “It always happens like that. Sometimes you turn up, you’re so tired … you’ve been on the jackhammer all day [at work], but you start playing and you get a big lift that carries you through. It happens straight away, as soon as you start the first song.”

One thought on “Elliot Fuimaono”