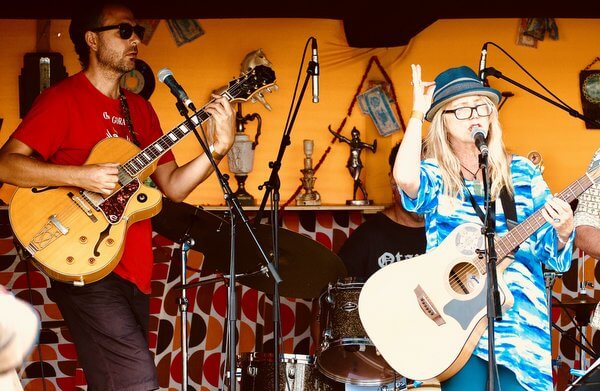 The members of this Kapiti Coast band are associated with many top New Zealand acts.

Clare Christian – Singer, Songwriter, Guitarist. Clare has worked for many years in the music industry both in her homeland New Zealand, and in London. She has consistently worked with New Zealand’s finest musicians covering many genres including Jazz, Rock,Blues, Folk and contemporary popular songs. While in London for five years from 2005, Clare formed Ultralounge. A jazz based ensemble which featured the original Pink Floyd guitarist Bob (Rado) Klose. While in London Clare tutored singing and stage presentation at ‘The Rock Academy’. This was an academy set up for youth at risk in South London where young musicians could come out of their bedrooms and hone their craft with professional musicians and their peers.

Joe Callwood. Electric and acoustic guitar and backing vocals. Joe is a vastly talented and versatile guitarist/arranger who also works with much respected band ‘Little Bushmen’. Joe is rated as one of the best in the business.

Jeep Road plays a mix of contemporary covers and Clare’s originals.This is a very slick, professional band that delivers an original sound with a spectacular level of musicianship, originality and passion.  Click here for
Soundcloud tracks.