The day started fine and bright as every spring day should and the
club crew busily set about getting the stage sorted out and backline
gear (kindly supplied by Musicworks Wellington) set up.

By 12 o’clock a small but appreciative crowd had gathered to hear the
Jake Stokes Band kick off proceedings with a fine set of originals and
blues classics. In just a few years, Jake has come from being a
slightly shy and nervous performer to being well able to command the
stage at the Bristol and I personally love the fact that he, amongst
others, has blossomed through getting up on stage at almost every jam
night and mixing it with the more experienced players. Capital Blues
can take a pat on the back for providing a chance for young talent
such as Jake (and his band mates as well) to get a taste for playing
live. He certainly opened the gig with a loud bang – as only a young
dude with no tinnitus can do!!

Next up was a solo acoustic set from Dave Murphy. As many of you will
know, Carol Bean’s husband, Lester, has been seriously ill recently
and unfortunately took ill again just hours before this gig was
happening so Carol was unable to sit in with Dave this time
out. Nonetheless, Dave put on his usual sterling performance with some
old style fingerpicking blues as only he can.

Marg Layton and her wonderful band were next up and again blew the
crowd away with some big sassy vocals and fine acoustic
picking. Unfortunately their set suffered the ignominy of a blown
circuit breaker halfway through so things were held up for a few
minutes while the Bristol staff reset the culprit RCD! Then it was all
on again for Marg and co to finish their set. It was slightly ironic
that one of the acoustic acts of the day had to put up with electrical
problems!

Julie Lamb & The Lambhunters picked the pace up a bit next with some
more rich vocal performances from Julie and her band. This time out
with this band she chose not to do any of the material from her recent
critically acclaimed album ‘Tripping the Light’ but instead chose some
very tasty blues classics to get her vocal chords around – and did it
very well, I might add!

The Red Dog Saloon Band were up next and featured George Barris on
bass, standing in for a somewhat forgetful Elliotte F!  Dougal and
Dave belted out the vocals and guitar interplay with the recently
renamed ‘Rock’n’Roll Roger’ Watkins taking care of drum stool duties.

Dougal took a quick 10 minute break and then took to the stage again
with Wayne Mason & The Fallen Angels. Unfortunately Greg Turner
couldn’t make it down from Auckland for the gig so old Doogs had to
quickly learn the guitar parts to some of NZ’s most well-known songs –
and not a bum note passed his speaker cones! Even his harmonies
weren’t too shabby…..

Kayte Edwards & Al Witham haven’t been regular attenders of the club
since they both decided to move up the coast to Kapiti a couple of
years ago so it was good to see them onstage resurrecting one of the
lineups of Kayte & The Barflies – once again with poor old Dougal on
guitar!! (No rest for the wicked, matey!!)

And then Manalishi took over the stage playing their take on the blues
era of Peter Green and Fleetwood Mac featuring Rockin’ Bob Smith on
keyboards and, for the first time, the horn section of Damian and
Chris on several of the songs in their set. Apparently they were the
loudest band of the day according to the decibel meter but I think it
was all down to the horns not having a ‘quiet knob’!!

A quick reconfiguration of the stage and mics and Damian was back with
his band, Shaken Not Stirred, featuring more jazz based blues and also
a brief but enjoyable performance by Louis Baker on guitar.

By this time the gig was running a bit behind schedule but around
9.20, Hammond Gamble took over the stage along with Bob Smith, Ross
McDiarmid and Andrew Richardson as his backing band. And, man, what a
performance! Taking some classic blues rock and wringing the neck of
his old strat, Hammond blew the audience away with some very tasty
chops and some fine singing.

Neil Billington & Friends then took over as the night wore on – but
the crowd remained firmly in place.  Special guest in this set was
Rotorua’s Mike Garner on guitar and vocals and again the crowd lapped
it up.

As Bullfrog Rata had called off at the last minute due to a double
booking, Dirt Box Charlie were a late addition to the bill and once
again put on a fine performance with their groove based swampy
Manawatu blues. Like Jake Stokes, they’re all just young guys but,
boy, do they know what they’re doing.  Around quarter to one in the
morning the amps were eventually silenced and the lights turned off
and a happy and musically overdosed crowd headed off home.

Apart from the annoyance of a fuse blowing to interrupt Marg Layton’s
set, everything had gone to plan. Every band had performed flawlessly
and the crowds who supported the gig had enjoyed over 12 hours of some
of the country’s finest blues performers.

I’d like to say a special thanks to the management and staff of the
Hotel Bristol, without whom the club would be lost and without a
home. A big thanks also has to go to Damian and Ross for looking after
the sound all day. Sterling work, guys! All the club committee members
did a fine job of organizing the proceedings – special mention has to
go to Kevin Buckley’s newly discovered MC’ing skills – a true natural!
And his comment about it being the first time he’d shared the stage
with Neil Billington was a true gem!!  Thanks also to all the club
regulars and everyone who turned out to support the gig throughout the
day.  Your attendance at the gig made it all worthwhile.

And finally, thanks to Lion Nathan for their input and Musicworks
Wellington for providing the backline gear which performed perfectly
throughout the day.

All in all, a highly enjoyable and successful – if very tiring – day!!
Should we make this a regular annual event?? Let us know your thoughts
and we’ll see what we can do. 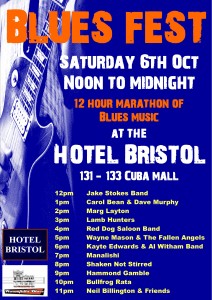