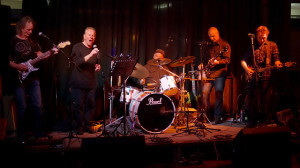 According to George Barris, the lineup on the night will be different. “George Limbidis, the original bassist, passed away in 2000. So I will be playing bass (I was on guitar originally), and Phil Pritchard’s son Mark will be on guitar”.

Opening for HIGHWAY will be Del T & The Midnight Ramblers – originals
and covers to rock yer soul.